Mumbai production house Curious imported a Ferris wheel from the UK to shoot a commercial for Cadbury Glow chocolates on location in southern Hungary. In the spot, a couple shares the sweets while apparently stuck on a broken-down Ferris wheel in a quaint town square. 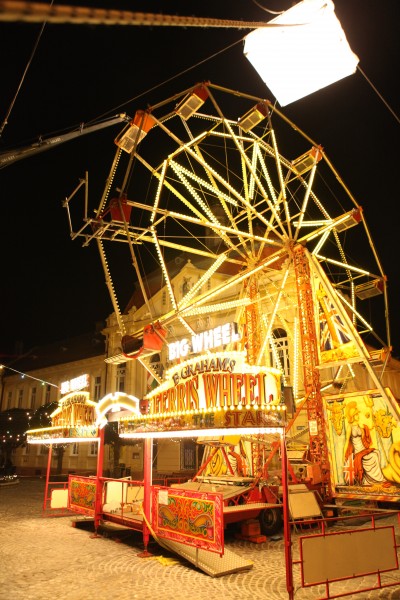 The Ferris wheel was imported from the UK because that was the only place in Europe where the team could find the specific open-seat design they needed. Alternatives involved closed cabins or rows of seats facing each other, neither of which would work for the commercial’s premise.

Filming took place in the town of Szigetvar in southern Hungary near the border with Serbia. The production team closed the main square for three days to create their set and shoot, relocating a pre-arranged concert to accommodate filming.

“As the whole main square became a set, it was a challenge to keep every part of it under control, especially as all locals wanted to take a ride on the wheel,” says Csanad Darvas of servicing company LowBudgetFilmShooting.com: “The biggest challenge was, indeed, the wind, as we had a huge, custom-built light set – basically a giant softbox – hanging above the wheel with a 50-metre crane. So we had to be very careful with that.”

A Panther Galaxy with Scorpio II 3 Axis remote head was used to film the actors on the wheel itself and a pair of Alexa cameras completed the technical complement.

“The spot is a generic, European-looking small town,” Darvas adds: “It's not told if it's Hungary or another part of Europe. Hungary is very good for acting as a generic European location, thanks to its eclectic heritage in architecture.”