RCN Films shot in Colombia’s Tayrona National Park for a new campaign for the glass bottle manufacturer O-I. The spot features a castaway on a blustery desert island whose attempts to cast a message in a bottle into the sea are thwarted when the plastic bottle blows back in his face. 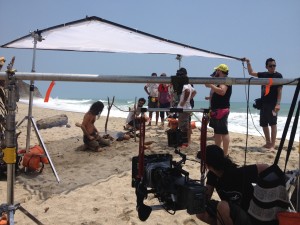 The production team chose Tayrona National Park on Colombia’s Caribbean coastline as a stand-in for their virgin desert island.

“We needed a place that looked like a virgin island,” explains DDB Colombia: “We had to be careful, since any trace of civilisation could ruin everything and take realism away from the story.

"We chose the Tayrona Natural Park, near the Sierra Nevada de Santa Marta. The fact it is a natural reserve assured us we would have nothing but nature around us.”

Few changes were made to the location for the shoot. The production team built the castaway’s hut and had to keep away from a construction site on the other side of the beach. Access was a challenge as the beach itself was relatively remote.

“The nearest road was nearly 200 metres away, paths were rugged and we were surrounded by wild mountains,” the agency adds.

“Between the road and the location it was necessary to cross a mangrove swamp that communicates with the sea - we had to be very careful not to lose our equipment. Also, being so close to the mangrove was always a latent risk with the possibility of facing wild animals such as crocodiles and alligators.”

Colombia has broadened its appeal as an international filming location by launching a filming incentive worth up to 40% of eligible spend. Antonio Bandereas’ true-life drama The 33, the story of the Chilean miners who spent 69 days trapped underground in 2010, became the first international feature to qualify for the incentive earlier this year.