Tony Petersen Film shot on location in Iceland for a live-action trailer for new hardcopy book role-playing game Degenesis. The three-minute spot features three warriors terrorising a couple and their young son at their home on a remote, windswept plain. 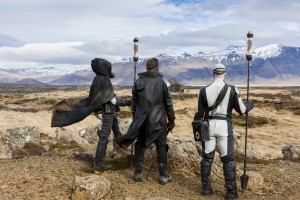 “We shot the trailer in Iceland, approximately one and a half hours north of Reykjavik,” comments Volker Steinmetz, a producer with Tony Petersen Film: “We decided on this location because the landscape and the nature of Iceland fit perfectly with the post-end-of-world settings of the Degenesis game.”

Republik Film Production serviced the shoot and the team specifically scouted for a wilderness spot that already had a small hut structure.“We were looking for an abandoned house with snowy mountains in the background,” says Republik’s Saemi Nordfjord: “The hut we chose was actually made of concrete so we covered it with a wooden facade.”

Filming took place over a single shoot day, which was possible because of Iceland’s long hours of summer daylight. The shoot in fact extended a full 16 hours, with twin brothers cast as the young boy to accommodate the length of the working day.

The landscape and the nature of Iceland fit perfectly with the post-end-of-world settings of the Degenesis game.

Strong winds were the biggest challenge they faced on location. The weather ended up adding to the sense of tension in the finished spot, but on the day of the shoot the team had to abandon planned drone aerial shots because of the rough conditions. A cherry-picker crane was used instead.

“It was quickly clear that the landscapes and nature of Iceland was perfect for us,” Steinmetz adds: “It feels so lonely and wasted in a way - no footprints of civilisation. We had a very small budget for the entire production and actually it’s a good example that it’s worth travelling to the perfect location – the setting added so much production value.”