Filmmaker David Ayer and his creative team recreated World War 2-era Germany in central England for the Brad Pitt tank movie Fury. The film follows the exploits of an American tank crew – manning a tank nicknamed ‘Fury’ – in the dying days of the war in 1945. 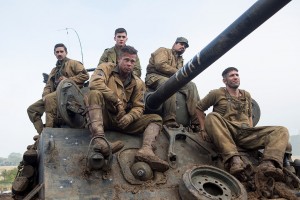 Location filming took place over 12 weeks in rural Oxfordshire and at Bovington Airfield in Hertfordshire, where the production team built a mudded German village.

“There’s an amazing crew base [in the UK], so that was a good place to start,” explains producer John Lesher: “But there’s also an amazing amount of assets in England – tanks, armoured vehicles, both German and American. Finally, the light in England – that beautiful northern light – and the weather was a good match for Germany. For all of these reasons, England became the ideal place.”

The town set was built over three months, with the central layout designed around how Ayer was planning to shoot the tanks rolling in from the surrounding countryside. It was important that the town's main square didn't feel dwarfed by the size of the tanks.

Construction materials had to look realistic while also accommodating the needs of the story. A ‘wooden’ sawmill that burns throughout the movie’s climatic battle had to be made of disguised steel and concrete in order to burn for the week it took to shoot the sequence.

Five real US Sherman tanks were sourced from within the UK for the shoot, one of which was provided by the Tank Museum in Bovington for use as Fury.

A more practical exterior set of the tank was also built, along with an enlarged set replica of the interior. A scan of the real tank interior was used as a design blueprint and then the team increased its size by 10% to allow more practical filming space. Forty-two separate parts were removable to allow maximum flexibility for shot selections. 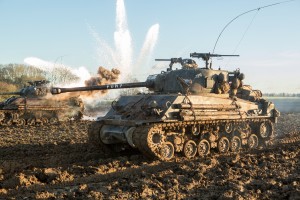 “It’s a very small set and every wall had to fly away, allowing David to shoot from any angle,” adds production designer Andrew Menzies: “At the same time, it would be on a gimbal moving around so that it would feel like a moving vehicle – and of course, as we were shaking it around, it couldn’t have any wobbling or loose parts.”

The UK has become one of the world’s top production hubs, partly because of its generous filming incentives. Easy access to relatively generic rural locations within just a few hours of world-class studio facilities is also a major advantage.

England’s Home Counties have pedigree as stand-ins for World War II Europe. Steven Spielberg built a French village at Hatfield north of London for the finale of his game-changing war drama Saving Private Ryan in the late 90s and returned a few years later for his D-Day miniseries Band of Brothers, mainly set in northern France.