Cut Media headed to Skye in Scotland’s Inner Hebrides to film a new mountain-biking short with rider Danny Macaskill. The Ridge follows Macaskill’s efforts as he cycles across his native isle and scales the Inaccessible Pinnacle on a mountain known as Sgurr Dearg. 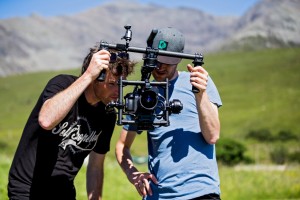 Working in partnership with Five Ten and ENVE Composites, Stu Thomson of Cut Media accompanied Macaskill on a scout of the location a month or so before the shoot. The scout was hit by terrible weather conditions but they managed to plot a route of ascent and identify parts that Macaskill would be able to cycle.

“The Ridge itself is over seven miles long so we came up with a list of locations to target each day of the shoot,” Thomson explains: “With access so difficult we had to hike in and out each day, between four and eight hours hiking each day. This was with all our kit, Danny’s bike, the drone and all our food and water.”

Much of the footage was filmed using a DJI S1000 Drone, which comprised eight separate rotor blades carrying a cradle fitted with a Panasonic GH4 camera. The apparatus offered great flexibility for the shoot, although the logistics involved with use in a remote filming location carried a distinct set of challenges.

“With such difficult access we had to carry it in and out each day - using two modified broom handles (see above) - and with a battery time of ten minutes per battery we took eight batteries with us each day, which added a huge weight to everyone’s backpack,” Thomson adds.

Conditions on the island were generally better than during the initial scout, although there were still times when the team had to wait hours for clouds to clear.

“We’d given ourselves two weeks on the island to give us time to hopefully get good weather and we ended up shooting for ten days in total,” Thomson concludes.