Dad’s Army movie adaptation to film on location in Yorkshire

A movie adaptation of the Home Guard comedy Dad’s Army will film on location in Yorkshire, north-east England. The region will stand in for the fictional seaside town Walmington-on-Sea, protected by an inept Home Guard division in World War II. 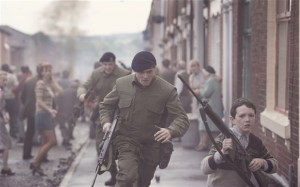 “We are very excited to be announcing this news and it doesn't get much better than this – a truly iconic series, a fabulous cast with some the cream of Britain’s acting talent – and all set in the stunning landscapes of Yorkshire,” said Sally Joynson, Chief Executive Officer of Screen Yorkshire.

“This is great news for Yorkshire and for Screen Yorkshire - the culmination of months of work and our investment has played a critical part. It’s a fitting finale to an already fabulous year for the region.”

The original Dad’s Army TV comedy ran for nine series from 1968 to 1977, with location filming for the Walmington-on-Sea setting taking place across Norfolk.

Yorkshire is a popular filming location for British features and TV production. Historical Northern Ireland drama ’71 (above) is among the most recent examples. Set during the Troubles in Belfast in 1971, the film follows a young English soldier as he becomes separated from his regiment after a riot on a hostile city estate. The production doubled locations in Sheffield and Leeds for the streets of Belfast.

Screen Yorkshire supported ’71 through the Yorkshire Content Fund, which has GBP 15 million a year backed by the European Regional Development Fund. The fund has supported a range of features and TV productions over the last few years, including the BBC’s period gangster drama Peaky Blinders, the fantasy miniseries Jonathan Strange & Mr Norrell and Sam Worthington's assassin drama Hunter’s Prayer.