Actors Jessica Biel and Patrick Wilson will film new movie The Blunderer entirely on location in the Greater Cincinnati region of south-west Ohio. The film marks a return to the city for producers Christine Vachon and Ted Hope, who shot locally with Cate Blanchett for the upcoming Carol. 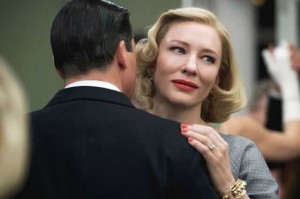 "We had a great experience in Cincinnati on our film Carol (left),” said Vachon.

“The Film Commission, the rebate, locations, infrastructure and welcoming people of Cincinnati - brought us back a second time within one year."

Added Kristen Schlotman, Executive Director of the Greater Cincinnati Film Commission: “This industry has had a tremendous impact on the local economy and we are excited to have repeat business with Killer Films. People come to Cincinnati and then want to return.”

The city recently hosted Don Cheadle’s musical biopic Miles Ahead. Cheadle directed and produced the film, co-wrote the screenplay and also stars as the jazz innovator.

“Cincinnati has a lot to offer us and we are very excited to be here,” said Pamela Hirsch, a producer on Miles Ahead: “It was a long and thoughtful process to decide where we could film this movie. We landed on Cincinnati because of the attention and total co-operation of the film commission, the state's film incentive, the location and the good-will of the people.”

Ohio offers a base 25% filming incentive and the programme has a USD 20 million fund for the next year. The state has become more popular as a filming location in the past few years, hosting scenes for the Marvel sequel Captain America: The Winter Soldier and the Kevin Costner sports drama Draft Day.