Screen Australia will sign an agreement with the Korean Film Council to better facilitate co-productions between the two countries. Australian movie Kill Me Three Times, featuring British comedian Simon Pegg, is among the films showing at the Busan International Film Festival. 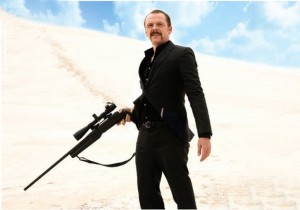 The Memorandum of Understanding (MoU) for film production will be finalised following the signing of a Korea-Australia Free Trade Agreement. Under the terms of the MoU, Korean and Australian productions will be eligible for incentive support in each respective country.

Fiona Cameron, head of Screen Australia, is attending the 35th Australia-Korea Business Council and Korea-Australia Business Council Joint Meeting today and tomorrow (1-2 October), where she will chair a forum discussion on co-production opportunities between the countries.

“This agreement will ready us to accept applications as soon as the Free Trade Agreement comes into force, which will permit immediate commencement of official co-productions between the two countries,” Cameron said: “Australia is a great partner and used to working collaboratively. This new step will present some fantastic opportunities for both countries especially in children’s animation.”

The trade agreement and co-production memorandum are being signed as the Busan International Film Festival gets underway in Korea's second city. Kill Me Three Times (above) and Robert Connolly's Paper Planes are among the Australian films being screened.

This new step will present some fantastic opportunities for both countries especially in children’s animation.

Korea’s profile as an international filming location is on the rise. The country’s filming incentive is worth up to 30% and the programme recently helped attract Marvel, which filmed scenes in Seoul for superhero sequel The Avengers: Age of Ultron. The Mayor of Seoul, Park Won-soon, was in Los Angeles over the weekend, partly to promote his city among the Hollywood studios.

The Wachowski siblings – best known for seminal sc-fi movie Matrix – are scheduled to film scenes for their new TV drama Sense8 in Seoul. Discussions are also underway to bring part of the upcoming sci-fi sequel Star Trek 3 to the Korean capital.