Mori Inc filmed near Tokyo for the new music video I Won’t Let You Down for US alt-rock band OK Go. Backed by Honda, the promo features an imaginatively-choreographed dance number with the band riding on Honda’s UNI-CUB personal mobility devices. 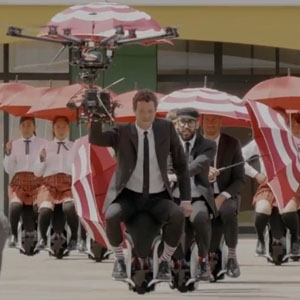 The band had wanted to work with Mori Inc founder Morihiro Harano for several years and so spent a month in Tokyo working on the new video. I Won’t Let You Down was inspired by the style of Hollywood choreographer Busby Berkeley, who worked on many of the most revered musicals in the first half of the 20th century.

Filming for OK Go’s video took place in the city of Chiba near Tokyo, using a specially designed drone. The camera was cradled on a buggy for opening tracking shots of the band dancing on their UNI-CUBs, and was then launched into the air when they moved outside, to film the dance sequences from above. Rain turned out to be the biggest challenge, forcing a shoot extension.

“Usually, August in Japan it never rains,” says Misato Tachibana of Mori Inc: “We only had three days of shooting and all had rain, so in the end we had to add an extra day. The drone is very weather-sensitive – it’s not good at rain and wind – so we had a lot of moments that we had to wait until the conditions were all set for the drone to fly.”

As a band, OK Go is renowned for imaginative and innovative music videos. For their 2012 track Needing/Getting, the group set up a stunt driving course in California and used a Chevy Sonic as a giant pick that played the song by plucking all manner of improvised instruments as the band drove through their desert location.