Global exports of UK television productions to China rose by a staggering 40% in 2013/14, but the US remains the single biggest international market for UK shows. The figures, published by the independent producers’ trade association Pact, show that overall TV exports rose by 5% in 2013/14. 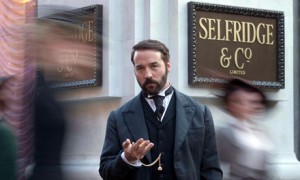 Exports to China increased by 40% year-on-year amounting to income of GBP 17 million. Sales to the US increased by a smaller 10% but still delivered a total income of GBP 523 million, comprising nearly half of the UK’s entire international exports.

The BBC’s fantasy drama Atlantis and historical drama The Musketeers were among the most popular exports, as was period drama Mr Selfridge (right) from ITV Studios Global Entertainment. Downton Abbey and Sherlock have also been huge international success stories.

“We’re not always the best at celebrating our successes in this country,” said Paul Dempsey, BBC Worldwide’s President of Global Markets: “This survey is a timely reminder that viewers in Shanghai or Seattle are just as likely to be talking about great British shows like Sherlock and Luther as commentators here are to be talking about the latest US TV blockbuster.

“With another record breaking year of global TV sales, BBC Worldwide is proud to be taking the best of British television to audiences around the world.”

The BBC’s fantasy drama Atlantis and historical drama The Musketeers were among the most popular exports, as was period drama Mr Selfridge.

Added Paul Sandler, Managing Director of Objective Productions: “China has probably the fastest growing and largest untapped market for UK producers - it’s certainly the most intriguing. They still have a real hunger for Western formats and techniques and that represents an enormous opportunity for UK producers over the next few years, both in terms of format sales and especially for genuine collaboration.”

China is also a lucrative production market and Hollywood is forging closer ties in order to capitalise. Transformers: Age of Extinction filmed in Hong Kong and mainland China last year to get better access to the tightly restricted market and went on to become the biggest ever hit at the Chinese box-office.