Egg Films of Cape Town recreated iconic French racing track Le Mans filming a new spot for Mazda in South Africa. The ad initially reverses its footage, showcasing the history of Mazda through the brand’s victory at Le Mans in 1991 and back to World War Two. 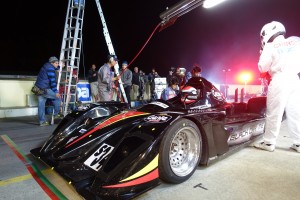 “The race track had very specific requirements in terms of the noise levels which we had to adhere to which was a potential issue but with careful scheduling by our AD Nick Lorentz, we managed work around it,” explains Rozanne Rocha, a producer with Egg Films.

“Working with a limited budget we didn't have the luxury to shoot everything in the perfect light so Paul Gilpin (the DoP) worked wonders in the time we had to make it look great.”

Visual effects played a crucial role in the finished film. Killarney race track was substantially altered in post-production to recreate Le Mans, while the Mazda that won the race itself had to be created entirely digitally because it no longer exists.

“In order to get the light interactions and correct driving dynamics for the Le Mans scene the background footage was shot with a stand-in vehicle, over which was placed the CG Mazda,” adds Marco Raposo de Barbos, of visual effects company BlackGinger.

“High Dynamic Range images were shot on location allowing for accurate lighting and reflections in the CG vehicle, essential for creating the photo-real images this project required.”