Mumbai-based Equinox Films shot on location in a remote part of Sri Lanka for a new campaign for the Amazon Kindle. The spot shows a traveller enjoying his Kindle as he makes the long journey to an isolated but picturesque village, where he reads stories to children. 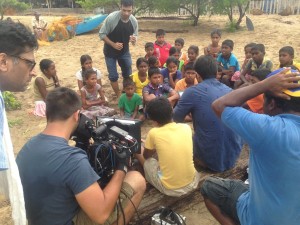 “We started our prep for this film ten days prior to our shoot dates, in the Lakshadweep Islands south of India,” explains Manoj Shroff, an Executive Producer with Equinox Films: “[Production manager] Nikhil Bopanna from our team was flown down to sort out all the logistics from locations to cast, hotels and all possible production details.

“Unfortunately we were asked to back out at the last moment due to permission issues. This happened the night before the rest of the team had to fly out of Mumbai. But this didn’t put a halt to anything.”

Sri Lanka service company Crew For Shoots squeezed a week’s worth of pre-production into just 48 hours when Equinox had to relocate so quickly.

“Our main challenge was to get the casting done from the village itself where people didn’t understand filming and the importance of timing,” says Priyanga Kumarasiri of Crew For Shoots: “But we managed to get hold of a respected person from the village and through him spoke to the kids and adults.”