New York production company m ss ng p eces turned a Santiago town square into a colourful showcase for fashion brand Urban-Knitter as a tie-in with 7Up Free. The spot features Urban-Knitter’s Magda Sayeg relaxing with the rebranded drink as she transforms the space. 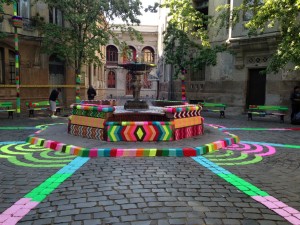 Director Tucker Walsh’s ideal filming location was the style of town square found in Barcelona – without trees and with a centre monument.

The size of the cast meant Europe wasn’t economically feasible for the shoot. Uruguay and Argentina were considered before the team settled on Chile.

“We needed a European look for the square, and this is something we could find in downtown Santiago,” says Gabriel Carratu of South American service company Vagabond Films: “The most important reason was that we needed to have full control of this square for five days, and Santiago was the only place we could find this type of location and have full control. The cost was another reason, because Santiago is very cost-effective in terms of production.”

Sayeg assessed the filming location a few weeks ahead of the shoot and took all the measurements she needed. She prepared the knitting in Texas, while the team in Santiago prepared all the staff on the ground.

We needed a European look for the square, and this is something we could find in downtown Santiago.

Filming lasted four days, with special protective covers and a security team looking after the location and the display work between shoot days.

“The biggest challenge was the fourth shoot day when there was a big student protest so close to the location and we had the whole square dressed up,” Carratu recalls: “This is something very unusual in Santiago, because it is the safest city in South America."

“We had to be ready," he continues, "in case the protest started to come in our direction. We made a great plan with police and security on how to keep the protestors off our set.”

Santiago’s colonial heritage and lower production costs make it a popular South American double for European filming locations. The spectacular visuals of the Atacama Desert are also accessible from the capital.

The Urban-Knitter Santiago shoot was part of a broader digital campaign for 7Up Free under the hashtag #FeelsGoodToBeYou.