A new film set in the secretive world of unmanned military drone strikes has finished filming in South Africa, doubling the country for locations around the world. Helen Mirren co-stars in Eye in the Sky, which follows a drone mission to monitor a terror cell in Nairobi. 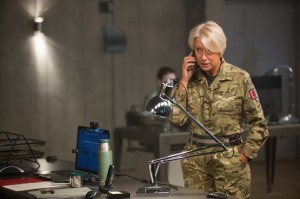 “The amount of location and filming opportunities for filming in South Africa is enormous. And the crews are world class! They shot constantly on international and local films. It’s been a joy to come home and work on a film that I feel passionate about.”

Unmanned drones have been a major – and intensely controversial – element of America’s overseas counter-terrorism campaign during President Obama’s administration. The subject is beginning to feature more regularly in screen stories such as the TV miniseries 24: Live Another Day and Andrew Niccol’s new feature Good Kill.

South Africa’s profile as an international filming location continues to grow and Cape Town now hosts the US terrorism drama Homeland, which relocated from North Carolina and doubles the South African city for Islamabad in Pakistan. Pirate drama Black Sails is based at Cape Town Film Studios, a facility that wants to expand to better cater for demand from Hollywood.

More productions are now doubling South Africa for US locations. The recent dystopian feature Young Ones was a co-production between South Africa and Ireland which doubled Springbok near the Namibian border for an anonymous US state before doing post-production work in Dublin.