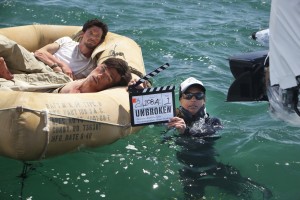 Unbroken tells the remarkable story of Louis Zamperini, who competed at the 1936 Olympic Games before serving in the US Air Force in World War II. He was shot down by the Japanese and survived nearly 50 days adrift in the Pacific with his crew, before then being captured and spending two years as a Prisoner of War.

Mexico was among the international filming locations considered for Unbroken, as Baja Film Studios offers a major water tank facility that famously hosted James Cameron’s Titanic set in the late 90s. However, Australia ended up being a more suitable option, both practically and financially.

“Because [Australia] had this tank, it was a case of can we find the other locations the film needs. And we were able to?” producer Matt Baer told the Sydney Morning Herald: “That's what it boiled down to: would it be economically and physically feasible?”

Added Jolie to the outlet: “The tax incentives were good, the locations were perfect, the crew are amazing. There's very much a community – we've all become friends – and at the same time there's a very, very strong work ethic. I love them and I hope to come back and make another film.”

Australian locations doubled for California, Berlin, Hawaii and Japan, the outlet reports. The film has been one of the biggest movies to shoot in Australia in the past year and played a major role in a 50% boost in international production spending in the country. Disney’s Pirates of the Caribbean 5 will film in Queensland from early next year.

Unbroken will be released in the US on 25 December 2014 and in the UK in January.