The BBC is filming on location on Gran Canaria in the Canary Islands for new TV comedy series Woody. Set on a fictional Spanish island, the show follows an undercover reporter who gets caught in a series of crimes and mysteries when he heads to Spain to flee his corrupt editor. 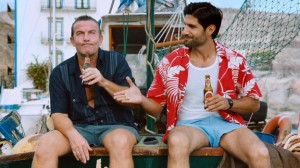 British actors Kayvan Novak and Bradley Walsh star in the six-part show that will be broadcast in spring 2015.

“We’re delighted to be making this huge, silly, sunny show for BBC One,” said writer and producer Neil Webster.

“We have a whole raft of capers for Kayvan, Bradley and the gang to enjoy, including talking parrots, the island’s annual hypnotist convention and the murder of the Spanish singing superstar, Elton Juan. We’re aiming to bring a lot of warmth into viewers' homes week after week.”

Added Novak: “So here I am in the sun, solving crimes and pretending to be a pirate, a hypnotist and a lady croupier. I thought life couldn't get any better. Then I saw Bradley Walsh drive by on a jet ski wearing nothing but a dressing gown. I love this place.”

The Canary Islands are hugely popular international filming locations as they offer the warm Spanish climate and a Special Tax Zone which reduces production costs and has attracted many high-profile movie shoots. Indeed, the BBC has a history of filming in the islands and most recently doubled Lanzarote for the surface of the moon in an episode of Doctor Who.

Ron Howard recently filmed on both Lanzarote and lesser-known La Gomera for his upcoming historical drama In the Heart of the Sea. The film is based on the true story of a whaling ship wrecked by a sperm whale in the early 19th century, which later inspired the classic novel Moby Dick.