Written by The Location Guide on Nov 28, 2014. Posted in General Interest

Director Martin Werner returns to shoot in Bulgaria with Filmmaker 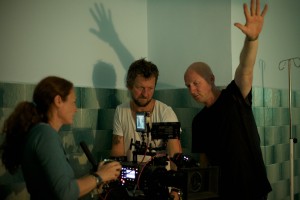 The song Happy Home topped the Scandinavian charts and Bacon CPH produced the video. They shot with the Bulgarian production company Filmmaker, with whom they collaborated in 2013 on a great campaign for Saturn, the German chain of electronics stores.

“Every time it’s a great pleasure to work with Martin,” says Fori Bojilov, head of Filmmaker: “His crazy ideas and great approach, combined with the wonderful attitude to the local crew and talents, always leads to great results. This time was the same.”

The video was filmed over two nights in a real hospital and at Nu Boyana Studios, involving Bulgarian crew, actors, stunts and extras.

“That was the first time in my servicing career when the director and the cinematographer arrived in Sofia a few hours before the crew call,” Bojilov adds: “I feel honoured that Martin trusted in our assessment and preparation, communicating only by mail and phone."

“We were also impressed by Lukas," Bojilov comments, "who walked for two nights barefoot and almost naked, wearing only a hospital gown, even though it was cold outside and we even made it rain over him.”