Jude Law teamed with filmmaker Kevin Macdonald to shoot submarine thriller Black Sea partly on a real Russian sub in south-east England. The movie tells the story of a group of submariners searching for lost Nazi gold at the bottom of the Black Sea in Eastern Europe. 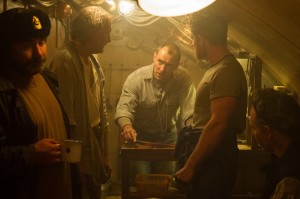 Location filming took place on a Soviet submarine known as the Black Widow, which is now privately owned by collector John Sutton and lives on the Medway River at Rochester in Kent. The production used it as a film set for two weeks, before relocating to a submarine set at Pinewood Studios.

“The Black Widow is a Foxtrot class submarine from the Russian Navy, built in 1967,” Sutton explains: “It is a ‘Hunter-Killer’ submarine, meaning that its function was to hunt and kill other submarines. There are only five of these remaining in the world, on display.

“The one I own has had to be repainted, but internally it was like a closed box with nothing much changed since when it left Russia; the engines, the controls. Everything in is there, even cigarette packets and postcards of women. There is nothing like it in the UK.”

Ten of our actors were on board, and the crew was pared back to about 15, but it still felt tight and claustrophobic.

Once the submarine was secured as a filming location, screenwriter Dennis Kelly developed the script partly around the Black Widow’s layout. The team considered filming the entire movie on the craft, but in the end it proved impractical.

“It’s incredibly complicated and difficult to shoot on a real submarine,” says producer Charles Steel: “But it was something for which we fought strongly. We felt that shooting some of the film in and on the Black Widow was imperative to impart realism. 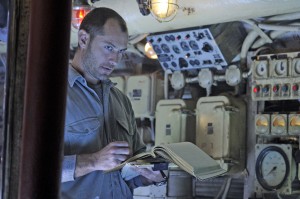 "It was important to have a sense of authenticity and credibility – and to see and feel the dirt and the grime!”

During the fortnight-long location shoot, a pontoon was set up around the Black Widow to supply all the usual filmmaking services, including green rooms, power generators and toilets.

“We’d climb in, close the hatch and spend the day filming in there,” Steel adds: “Ten of our actors were on board, and the crew was pared back to about 15, but it still felt tight and claustrophobic.”

Law comments: “Trying to differentiate days did sort of go out the window. You’re lacking in light, space, and air.”

Relocating to the studio remained a challenging experience as the set needed to evoke the claustrophobic atmosphere of the real submarine. 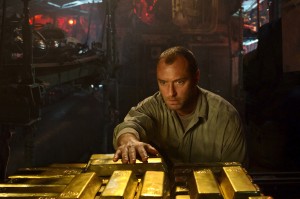 “For these sets, there needed to be a more user-friendly environment to shoot in,” recalls production designer Nick Palmer: “We did have to put in a few things that wouldn’t necessarily be there, because the script called for them.

“The real submarine has got so much stuff coming out of the floor that the actual area you can walk on is very limited. Our sets were based on the same diameter as the real submarine and were roughly the same length as the equivalent spaces in the sub.”

Law concludes: “You’re trying to bring something to the camera and to the story so there was always a physical level of high tension – which was exactly what we needed, and there couldn’t have been any other way to tell this story.”