Filming Antarctica: Anthony Powell on shooting in the freezing south

New Zealander Anthony Powell is a self-taught filmmaker who has spent more than 100 months living in Antarctica over the past 15 years. He had to specially adapt his camera equipment for the inhospitable conditions as he shot his feature documentary Antarctica: A Year On Ice.

Powell collated footage filmed over a decade following the everyday lives of trades-people who are crucial to maintaining Antarctica’s research bases. The film also showcases the continent’s spectacular and shifting landscapes. Much of the basic functionality of Powell’s film equipment had to be altered for the freezing conditions – down to around -60 Degrees Celsius – through trial and error. Fluid-head tripods became useless as the liquid froze. Conventional batteries had the same problem, so the cameras were hooked up to 12-volt lead-acid batteries by way of a voltage converter.

Powell designed his own electronic camera timers because time-lapse products were not commercially available when he first started filming.

“I initially started shooting time-lapse when digital cameras got to the point where you could take a still photo that would hold up on a big screen, and was amazed at how well it brought the landscape to life,” Powell explains.

“You can normally sense the things going on around you, but not see them. The first few years was just building up more and more footage, as well as inventing systems that could still work in the extreme cold of winter.”

You can dress for the cold easily enough, but when you add the wind, any slightest gap in your clothing becomes painfully apparent very fast.

Extreme cold permeated the entire process and often meant that Powell could not safely remove his gloves to operate the cameras. In these instances he had to make sure he was carrying pliers and other small pointing instruments to enable him to adjust the more fiddly parts of the equipment.

Viewing the action on a LCD screen was sometimes impossible as the screen would stop operating in the cold. However, simply looking through the viewfinder could be a hazardous experience as frozen eyelashes might easily end up stuck to the screen.

Storms and driving wind were as much of a challenge as the cold, pummelling the equipment and sometimes managing to damage electronics regardless of Powell's protective measures.

“The wind is harder to get used to than the cold,” Powell considers: “You can dress for the cold easily enough, but when you add the wind, any slightest gap in your clothing becomes painfully apparent very fast.

“I failed to tuck my glove in properly one time, and in the time it took me to walk between buildings, I had frozen a patch of skin on my wrist that came up in a row of blisters.”

Alongside the climatic conditions, long-term residency in Antarctica often results in the effects of so-called Winter T3 syndrome, which include short-term memory loss and low energy levels. 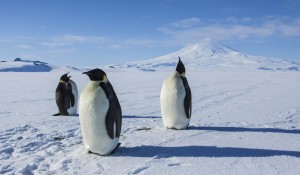 The condition is thought to be caused by the thyroid T3 hormone being drawn away from the brain, and exacerbated by general fatigue and Vitamin D deficiencies through a lack of sunlight during Antarctica's six-month winter. Nonetheless, Powell is not put off.

“Even after all these years, I still love it. It truly is the last pristine wilderness left on the planet. There are places there where no human has ever set foot. The air is incredibly crisp and clean, and the skies are clear and free of light pollution, letting you see more stars than you can imagine.

“If you get away from the base, there is absolutely nothing to hear on a calm day but yourself. The auroras and nacreous clouds can fill the entire skies sometimes; it is just breathtaking.”

Antarctica: A Year On Ice is showing now in selected cinemas in the US.