Bioscope Films has shot a street race in Johannesburg, South Africa, in a campaign for the new Toyota Etios Cross. Urban Challenge pitches the vehicle and driver against BMX champion Siphiso ‘Skizo’ Nhlapa. 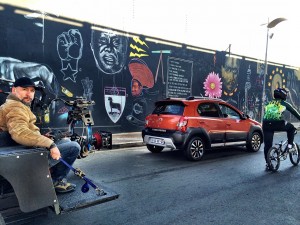 “We shot in downtown Johannesburg in the Maboneng district and in areas in Braamfontein near the constitutional court,” explains Daniel Kaplan, producer for Bioscope Films.

“These locations were chosen as the director (Hylton Tannenbaum of Bioscope Films) wanted the campaign to have a distinctive urban feel with a recognisable Johannesburg skyline, which is on strategy for Toyota’s new Etios Cross as an urban/SUV type crossover vehicle.”

The locations themselves were filmed more or less as they were, with the addition of some ramps and safety measures for Nhlapa.

“Working in busy areas of Johannesburg with tracking vehicles, a Libra Head and stunt drivers meant we needed to control the traffic for the high paced stunts that crossed roads and intersections, with as little disruption to local businesses as possible,” Kaplan adds.

Johannesburg is a popular South African filming location. The city recently hosted production company MJZ for a shoot for Swedish retailer Ikea, which involved complex wirework as a brave actress was dropped between high-rise buildings onto a tower of beds. Before that, Johannesburg doubled for a Prohibition-era US city for a dramatic Dulux campaign.

As a country, South Africa is enjoying a raised international profile as host of US productions including Homeland and the pirate drama Black Sails.