CapGun Collective headed to Rio de Janeiro to create a GIF visible from space for a new spot for Ballantine’s Scotch whisky. Artist INSA, known for his ‘GIF-ITI’ work, led a team of 20 to create the giant GIF over four days. 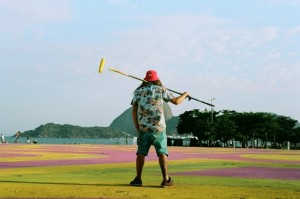 The production team scouted around the world looking for a space of more than 14,000 square metres in a location that had a minimal risk of cloud cover. Rio de Janeiro proved the best option.

“We needed to find a large location in Brazil and it was mentioned that it needed to be ‘the size of two football fields’,” recalls Lorenzo Benedick of service company Vagabond Films.

“We also had to look for an open area to make it easy to shoot the satellite.”

They found a large private outdoor parking lot surrounded by Rio’s beaches, the mountains and the city itself. With the Sugar Loaf Mountain also nearby, all the iconic elements of Rio de Janeiro were in place.

In order to make the GIF work from an orbital viewpoint, the production team secured access to a pair of ‘Pleiades’ satellites operated by Airbus. Each satellite moved over the Rio filming location once a day taking a single photo each time at a resolution of one pixel per 50 square centimetres. The artists on the ground changed the design every 24 hours to create a four-frame GIF captured by the satellites.

“To me the GIF was made by the satellite,” explains INSA: “All I had to do was receive the images and overlay them, then set them to loop.

“What I love about producing my GIFs is the amount of effort - the scale and man power that has gone into this is huge - but ultimately it's still just a 600 pixel wide GIF to be shared online.”