Marion Cotillard co-directed short film Enter the Game for Dior and Bliss Inc in Meyreuil in the south of France, a location intended to evoke Los Angeles. Cotillard also stars as a woman enjoying the tranquil surrounds of her hillside home and pool. 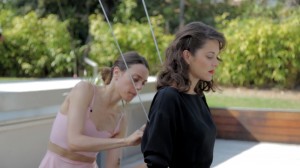 “We were looking for a contemporary villa with a pool,” says Sébastien Deporte of Monaco-based service company Factory: “Modern, sober, elegant and classy, with interesting architectural lines."

"From a large selection of villas covering all of southern France - from Biarritz to Monaco - we finally chose this one for she was perfectly responding to our needs.

“The spaces of each sequence had to be closed to one another. And the spaces of the villa in Meyreuil were just perfect for this particular timing.”

Cotillard and her Co-Director Eliott Bliss originally planned to shoot the film in a single shot but some of the more fantastical elements – such as a stunt moment where Cotillard dances on the surface of the pool – forced a different approach.

“We used a big crane truck holding a pulley installation set up above the pool,” Deporte explains: “The actress was wearing a harness and she was carried manually above the water."

"Our main concern was to manage the speed of the pulley so that she could cross and touch the water with her feet not to quickly or too slowly," Deporte adds.

“The balance of the actress was also a nice challenge because she’s not a stuntwoman in the first place and we didn’t have that much time for rehearsing, but Marion Cotillard was very focused and determined.”

Underwater shots were filmed in the same pool. The film itself is part of Cotillard’s Lady Dior campaign for the fashion brand.