Screenwriter Alex Garland filmed his directorial debut Ex Machina on location in Norway and at Pinewood Studios in the UK. The film tells the story of a young coder given the task of interacting with an artificially-intelligent female robot in a remote mountain retreat. 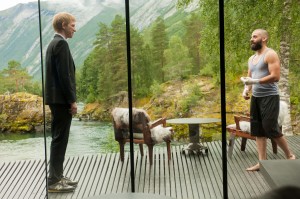 “It felt a bit like Scotland, where I’m from, but Scotland on super drugs. It’s incredible; these vertical hills, waterfalls everywhere and deep, deep fjords and sea lochs.”

Adds Garland: “We went on a great recce around Norway. We found this house and hotel that were in quite a remote part of Norway, and they were both built by the same architect (Jensen & Skodvin), so the house and hotel had a commonality of design.”

The layouts and features of two separate buildings – a private home and a hotel – near the town of Valldal in the western fjords, were combined to create Nathan’s home.

“The location brief was challenging and ambitious,” comments Sigmund Elias Holm of the Western Norway Film Commission: “They were looking for a combination of a sleek, edgy, mountain estate with glass feature walls, in a spectacular, isolated and contained mountainous setting.”

Sets of some of the locations in Nathan’s house were also built on stages at Pinewood Studios near London, but these were shot before the production travelled to Norway. 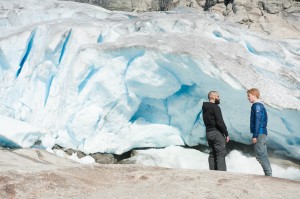 “I’m glad we shot it this way around and didn’t do two weeks in Norway and then four in Pinewood, because it’s difficult not to have your breath taken away by Norway,” says co-star Domhnall Gleeson.

“At Pinewood it was all so enclosed, and that was the idea: you feel psychologically that everything closes in. We got to some pretty intense places at Pinewood.”

Norway lacks a formal filming incentive for international shoots, which has left the country struggling to establish itself as a location for big-budget Hollywood shoots.

In the past year, however, the country has had film tourism success through Disney’s animated hit Frozen. The movie wasn’t produced in Norway but the story’s Nordic locations were inspired by Norwegian landscapes.