Bollywood star Ajay Devgn is set to direct himself in new movie Shivaay that will film partly on location near Calgary in Canada. The Alberta city got a profile boost last year hosting the highly-acclaimed TV drama Fargo with Martin Freeman, which starts filming a new series shortly. 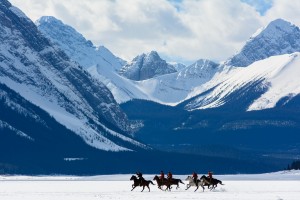 “As far as films from India, we’ve had a number shoot here but nothing of this scope and scale,” said Jeff Brinton, head of Alberta Film, in comments to the Calgary Sun.

“It’s a statement to just how hot Alberta is right now. It’s incredibly busy and one of the challenges is crew availability. Our shelves are bare when it comes to crew.”

In November last year work started on the Calgary Film Centre studio facility, which is intended to boost Alberta’s production appeal as an international filming location.

Toronto and Vancouver remain the top production hubs in Canada and the two cities attract many of the biggest studio movies from Hollywood. Alberta has a much smaller industry but in recent years has secured TV shoots like Klondike (above) and Hell on Wheels, as well as movies including Christopher Nolan’s Inception and Interstellar.

Shivaay will also shoot partly in Poland, an increasingly popular filming location for Indian movies. Bollywood productions are particularly active in searching for exotic filming locations around the world and are heavily courted due to their huge audiences and enormous film tourism potential.