Curious Mumbai chose to film on location in Austria for a new commercial for electrical appliance the Milton Electron Tiffin. Set in a mountainous part of India, the spot features a group of soldiers whose spirits are raised when they receive a heated care package. 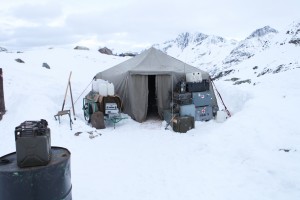 The spot was filmed at the Kaunertal Glacier near the Italian border in western Austria and the production team built a small military camp specifically for the shoot. Crew and equipment were in fact brought in from Hungary and clearing the area of snow was the first major challenge.

“While we luckily avoided the blizzards or high winds for the prep and shoot, the location could not take any vehicles, so we had to do all the snow work by hand before setting up the tents,” says Csanad Darvas of service company LowBudgetFilmShooting.com.

“The snow was about a metre deep with a narrow solid layer at the top. If we weren't careful, we soon found ourselves deep in the snow, up to around about our hips.”

Shooting at 8,000 feet the team was affected by the altitude, which became a major issue given the physical exertion needed to get to the location and build the set.

The spot was filmed at the Kaunertal Glacier near the Italian border in western Austria.

“There was a paved road we could use to bring in trucks, but the last 300-400 metres we had to walk in the snow, up a small hill,” Darvas recalls: “Then the snowfall arrived on the first wrap day and the paved road was closed for two days, just like the whole area. Luckily after that we could finish.”