Sonny London spent a week filming on a cargo ship off the coast of Istanbul for a new campaign marking Heineken’s sponsorship of the UEFA Champion’s League. The spot shows a group of sailors improvising a cinematic screening of the big match while at sea. 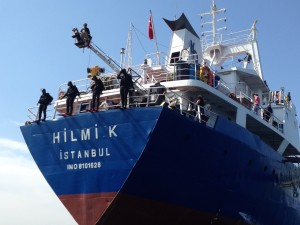 Service company AZ Celtic Films faced a challenge tracking down a suitable ship for the shoot. However, they had experience, having done something similar for the Istanbul leg of spy feature Tinker Tailor Soldier Spy.

The production team needed a ship that was big enough for the story they were trying to tell, but not so big that they would be restricted by maritime laws.

Crucially, director Fredrik Bond wanted to film on the open ocean, rather than cheating a dock-based shoot with green screens and visual effects.

“As you can imagine what we were doing was very unusual,” says Celtic’s Alex Sutherland: “Cargo ships require special permits and are only allowed to dock at certain authorised ports. The Istanbul waterways are one of the busiest in the world and we needed to have clearance to depart and enter harbours every morning and evening.

“Anyone that’s filmed at sea can tell you that everything becomes a lot harder than usual and needs a lot of pre-planning. Once we departed the harbour each day there was no turning back."

We all had to cram in tiny cabins all day long, fighting gasoline smells and seasickness.

“We were a large crew on board including all the cast," he adds: "It was a six-day shoot and we had an aerial and underwater unit that was filming simultaneously with the main unit. Co-ordinating all of this in the middle of the sea was far from easy.”

Comments Thierry Albert, Creative Director at Wieden+Kennedy Amsterdam: “We all had to cram in tiny cabins all day long, fighting gasoline smells and seasickness. That's when it gets very handy to get along so well with the client.”