Washington Square Films turned a home in Prague in the Czech Republic into a US household in a new spot for disinfectant brand Lysol. The shoot was serviced by Milk and Honey Films, and Prague was chosen mainly for its cost savings. 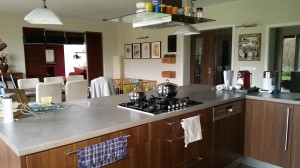 “This spot was filmed in Prague primarily for budgetary reasons,” explains John Campbell, who produced through Milk and Honey Films.

“Even with travel and accommodation, per diems, set dressing and props sourcing, the average western client can generally save around 50% or more doing it in the Czech Republic, than shooting in their own back yard.”

“A lot of it has to do with the subtle details. For example, the electrical plugs in this commercial were swapped with American covers. Books with English titles on their spines were brought in. The furniture was replaced with more American suburban-looking couches and chairs.

“We repainted the walls. We replaced light fixtures. The remote control was brought from the States and many options considered. Pictures and frames and candles and numerous other props were introduced to match the latest trends in interior design from the US.”

Books with English titles on their spines were brought in. The furniture was replaced with more American suburban-looking couches and chairs.

Recreating suburban America in Prague is a common practice. Milk and Honey has previous experience of downplaying the European feel from homes in the Czech capital and they work from a database of suitable buildings.

“Our props masters have huge stores of American pieces such as those plug outlets, doorknobs, end tables and more,” Campbell adds: “Very little has to be brought from the US to shoot for states here in Czech Republic.”