Singapore is getting a profile boost with the upcoming action sequel Hitman: Agent 47, which has launched a trailer ahead of it summer release. Based on the popular videogame franchise, the new movie was filmed partly on location in Singapore and at the island state’s Infinite Studios. 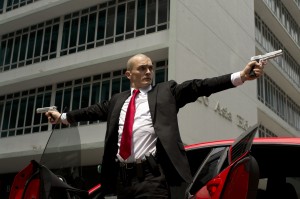 “An epic action film like Agent 47 demands a global scale,” said executive producer Michael Hendrickson, in comments to Today: “To be the first American studio film to present this truly unique locale as a backdrop is an incredible opportunity.

“The Singapore Media Development Authority (MDA) was supportive, from our initial visit to Singapore, all the way through to completion of production. Combined with the terrific, enthusiastic local crew, Singapore was a success for our film.”

Singapore has previously hosted the HBO Asia TV miniseries Serangoon Road. The production was set in the city as it appeared in the 1960s and built an extensive ‘Chinatown’ set on the back lot of Infinite Studios. Early last year, HBO Asia announced plans to return to Singapore to film TV drama Grace.

The island state faces production competition from neighbouring Malaysia, which offers a 30% filming incentive in addition to a Pinewood Studios facility in Johor close to the Singapore border.

To be the first American studio film to present this truly unique locale as a backdrop is an incredible opportunity.

Meanwhile, China offers a vast cinema audience hungry for international content. The film market is subject to tight government regulation but it’s increasingly being tapped with the likes of Transformers: Age of Extinction, which shot its finale in Hong Kong through a co-production agreement.