An environmentally-friendly chauffeur service has opened at The Bottle Yard Studios in Bristol. Studio Cars offers a fleet of low-emission and electric vehicles to transport production crew, cast and VIPs to and from the studio. 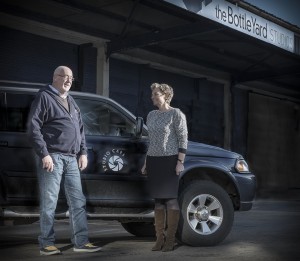 Studio Cars’ green credentials are being particularly emphasised. Studios and production activities account for the vast majority of the screen sector’s greenhouse gas emissions, which The Bottle Yard and Studio Cars will be tackling.

“We run 12 cars with modern low-emission diesel engines and are expanding our fleet to include the latest electric vehicles on the market, including the Mitsubishi PHEV, which will be charged at dedicated on-site charging points,” said Nick Kenyon, Founder of Studio Cars.

“We look forward to getting this partnership on the road this year, to support film and TV productions at The Bottle Yard whilst helping to make Bristol’s air cleaner.”

Added Fiona Francombe, Site Director of The Bottle Yard Studios: “We’re hugely excited to launch this new partnership, for a number of reasons. On a practical level it enables us to officially offer for the very first time our own dedicated transport for industry professionals based with us. More importantly, it gives the productions based with us the chance to make a real difference to their carbon footprint.”

The Bottle Yard Studios is establishing itself as a production hub for the west of England. Productions shot at the facility have included Poldark and the ITV comedy series Trollied, while the Disney series Galavant and the BBC’s Wolf Hall both based production at the studios.