RSJ Films and See-Saw Films shot partly on location near Sydney for the BBC’s new period drama series Banished, devised and written by Jimmy McGovern. The story is inspired by the establishment of the British First Fleet’s penal colony in Australia in the late 18th century. 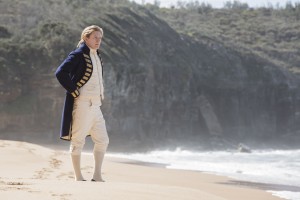 “Banished is fictional and doesn't depict actual events,” explains Simon Hailey, a co-producer on the shoot with RSJ Films.

“However, historically, the First Fleet settled in Sydney Cove, which is now Circular Quay, so Sydney always seemed to be the natural spiritual home for the location shoot. Plus our co-production partners, See-Saw Films, are based in Sydney and the local crew is fantastically talented and professional.”

While the majority of exterior scenes were shot on a specially built set at Manly Dam, location filming also took place in various national parks in Sydney and in the nearby Blue Mountains.

"Visually, they needed untouched, virginal beaches and bushland landscapes to convey a real sense of the harsh, hot, unfamiliar reality of the Australian environment for the members of the First Fleet," says Matt Carroll, Director of Production Attraction and Incentives, Screen NSW.

Once the location was finalised, the various production departments spent up to ten weeks preparing for a shoot of a little over two months.

Australian co-producer Brett Popplewell helped source local crew as filming coincided with a couple of large feature shoots in the area. Banished qualified as an official UK/Australia co-production and so received incentive support from the Australian government.

Historically the First Fleet settled in Sydney Cove, which is now Circular Quay, so Sydney always seemed to be the natural spiritual home for the location shoot.

Tents and solid buildings were both built for the penal colony set, with the production team taking inspiration from the natural surroundings.

“We were inspired by nature when we arrived, as indeed our characters would have been,” recalls production designer Claire Kenny: “Although all the timber we used to build our structures was white soft wood, with the skill of our scenic artists we stained and aged the buildings to represent the local materials that would have been available: eucalyptus, gum, paperbark and ironbark.” 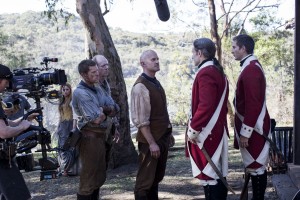 Only the exteriors were filmed in Australia. Interiors were shot in a warehouse space in Manchester in the UK. Both sets were specifically designed with the location changes in mind.

“Each building and tent had a ‘porch’ feature designed into it,” Kenny adds: “This meant that we could shoot arrivals and exits on location without seeing into any of the interiors. This device meant they we never saw in when we were on location and never saw out when we were in the studio. There was no interior dressing on our camp location.”

Very much an international effort, the tents were designed and made in four UK cities, before being shipped to Australia and erected by an international crew. Separate tents were designed and made for the UK studio shoot, with everything made 30% larger to ease the logistics of interior filming. Woven woolly screens were fitted over the tent and building windows so that the camera couldn’t see in and out either in the studio or location sets.

“Our principle concern with filming the entire schedule in Australia was getting cast and talent to sign up to nearly six months away from home,” Hailey comments: “Splitting over the two continents meant that cast and Heads of Department, whether Australian or British, would have some time filming close to home. 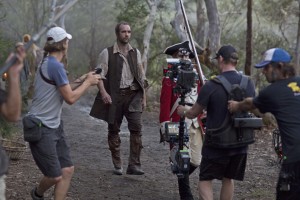 In Manchester the penal camp then had to be precisely recreated. The production team blacked out skylight windows and installed a new heating system to make the warehouse a suitable filming space. Hessian panels were used to diffuse light.

Banished is just the latest BBC production to film in Australasia. Jane Campion’s murder drama Top of the Lake was commissioned for BBC Two for a shoot on New Zealand's South Island and upcoming youth drama Tatau recently filmed in the Cook Islands.

Also in development is a crime drama the BBC is working on with the producers of Downton Abbey, tentatively named Bay of Plenty, which will shoot in New Zealand.

The Australian government recently announced plans to streamline the co-production filming process for the international partners with which it has existing agreements, including the UK. Forty-two separate projects have been made as official Australia-UK co-productions over the last 30 years.