Successful Norwegian TV drama Mammon has filmed scenes on location in Istanbul for its second series. The show follows a journalist whose life collapses around him when he uncovers evidence of corporate fraud. 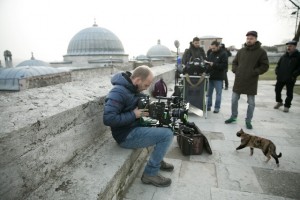 “We filmed in the historical peninsula in street market streets, at the old shipyard and at the modern part where there is the business district with skyscrapers,” explains Chad Ozturk of Turkish servicing company JaguarProjects.

“There haven’t been any changes - we just added some stalls at the market and some cars and extras in some scenes. Apart from that the series has a very natural style of filming, almost like a documentary.”

Istanbul is a popular international filming location and frequently doubles for other parts of the world. Ben Affleck’s Oscar-winning feature Argo used the city as a stand-in for Tehran for scenes set outside the US embassy in Iran.

Bond movie Skyfall set its entire pre-credits sequence in Turkey, staging a motorcycle chase across the rooftops of Istanbul and through the Grand Bazaar. The shoot then relocated to the majestic Varda Viaduct to film a fight between Bond and a villain on the roof of a moving train.

“Our team spent a long time negotiating and getting all the eventual permissions which allowed us to pull off one of the most spectacular opening sequences in the 50-year history of the Bond films,” Skyfall’s executive producer Callum McDougall told The Location Guide at the time.

More recently, the BBC used the city of Bursa, south of Istanbul, as a stand-in for the fictional country Tazbekistan in the BBC's satirical comedy Ambassadors.

The US television drama Tyrant relocated to Istanbul when violence flared between Israel and Gaza last summer.