Eeksaurus Productions filmed on location in Sri Lanka for a new ad promoting the longer battery life of the Samsung Z1 mobile phone. The spot shows commuters having to use kilometre-long charger cables to cope with their phones’ inferior batteries. 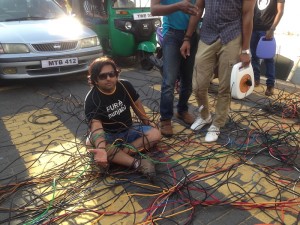 Filming on location in Galle Dutch Fort in southern Sri Lanka, the production team laid cables and extension blocks across city streets, but only for a couple of hours at a time because of their narrow filming windows.

“It was promoting Galle Dutch Fort as seen in the TVC and they wanted to get some advertising for film tourism. As a location we use Galle Dutch Fort frequently and local authorities always give their full support and co-operation.”

The lift where the characters find themselves in the final shots had to be specially built for the shoot as the real locations the production team scouted lacked space for a film crew. Temporary construction work took place on location as there are no studio facilities in Galle.

Sri Lanka is a popular filming location, especially for production companies based in India. Galle Dutch Fort was turned into a military fortification in the mid-17th century and has since been restored by the government.