Lucky Fish Productions used Cape Town as a near-future anonymous metropolis in a spot for the Audi A6. The commercial was shot over four days, with visual effects used to make Cape Town less recognisable. 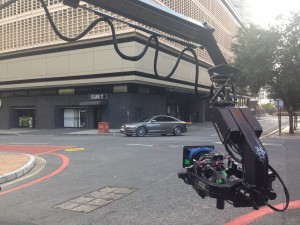 “We used the well-known ‘broken highway’ and the West Coast road for all the travelling shots,” says Platon Trakoshis of Lucky Fish Productions: “The airport shot was taken under the Civic Centre with the Cape Town Convention Centre providing the backdrop.

“We used the brand new Freedom Arm,” Trakoshis adds: “It’s basically a car with an extendable crane and a remote head for a camera. This allowed us to travel alongside, in front and behind the Audi A6, filming it smoothly from all angles at high speed.

“We also had to take into account that some countries drive on the left and others on the right, and accommodate for that.”

Natural lighting conditions were among the biggest challenges of the shoot as the production team need the perfect visuals. Shots of the Audi on the ‘broken highway’ had to be filmed in the minutes after sunset to avoid glare on the car, but the time window of suitable light was small as a result.

They also had to schedule ‘after-dark’ filming to showcase the vehicle’s night vision, although in the end the team opted for low-light conditions to make sure the Audi was actually visible. Colour grading in post-production completed the night-time appearance.