Somesuch filmed on location in Kiev in the Ukraine for a new campaign for paint manufacturer Dulux. Set in a future city devoid of colour, the spot follows a worker discovering a hidden group of rebels intent on delivering a literally brighter future. 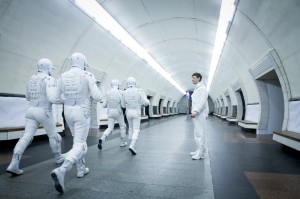 Filming for the Colourless Future campaign took place largely in existing warehouse facilities in Kiev, while a model city was built for shots of the future cityscape.

“The idea was to film as much as possible in-camera,” says Darko Skulsky, an executive producer with servicing company Radioaktive Film: “Kiev is multifunctional in terms of architecture and style. Wintertime and snow were on our side in creating clear white world.”

The production team negotiated with the owners of each location to allow them to paint each space using Dulux products. Perhaps unexpectedly, one of the main challenges turned out to be finding an Old English Sheepdog – part of Dulux’s long-term brand identity – for what turned out to be a single shot in the finished campaign.

“Clean white locations were a must in order to keep the continuity with the model city," Skulsky adds: "We used a few unexpected places like an old brutalist shipyard, a construction site, a former bobsled track and even one of the old opera house subways. We needed an impressive white world and mysterious colour mansion for the final sequence.”

The model city was built over several weeks during pre-production and the final visuals were augmented with digital effects.