New period drama Agnus Dei has wrapped seven weeks of location filming in Poland. Based on a true story, the film is set in 1945 and follows a young intern with the French Red Cross helping repatriate French survivors of the German death camps. 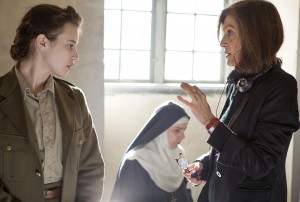 Filming started in Orneta in north-east Poland and included converting the town’s old railway station into the French Red Cross hospital as it looked in 1945.

“We are very pleased with the co-operation of the Polish crew who exhibited a high level of professionalism,” said producer Eric Altmayer: “We are also very impressed by the talent and skills of the Polish actresses.”

Added Tomasz Dąbrowski, head of Film Commission Poland: “We are happy not only because Poland won [the shoot] from other countries, but also because Polish filmmakers took a substantial part in the production: more than 50 members of the 60-people-strong crew are Polish.”

Steven Spielberg and Tom Hanks recently filmed on location in Wroclaw in the south-east of the country for the Cold War drama now entitled Bridge of Spies. The city doubled for Berlin.

“A Steven Spielberg film is definitely the biggest project we have been a part of so far,” said Rafał Bubnicki of the Wroclaw Film Commission in comments to Film New Europe when the Polish leg of the shoot was first announced.