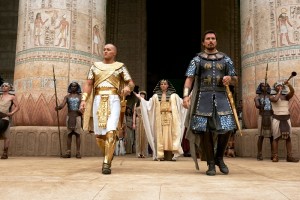 The new filming incentive will be worth 15% of qualifying spend on the mainland, Variety reports, and a massive 35% on the Canary Islands, which have already offered a special tax zone for several years.

Authorities nonetheless appear to be targeting smaller shoots, as per-production payments will be capped at USD 2.8 million.

Rebates will be issued through a shoot’s Spanish line producer, rather than having to be sourced through a more complex European Economic Interest Grouping, which is how Spanish filming became feasible for Exodus.

Authorities are set to decide in the next few weeks what specific categories of production spending will be eligible for the new filming incentive.

“Many productions come to Spain asking for locations, but even with the locations chosen they move to other countries because we do not have incentives,” Exodus Location Manager Felix Rosell told The Location Guide.

Spain is set for another firm profile boost in the next few months with the launch of the new series of Game of Thrones, parts of which were filmed in Seville and the town of Osuna.

The Canary Islands have been the most popular Spanish territory in recent years due to their special tax zone. Lanzarote and the lesser-known La Gomera doubled for the coast of Ecuador in Ron Howard’s upcoming survival drama In the Heart of the Sea.