Emma Thompson and Brendan Gleeson are filming on location in Germany for the World War Two movie Alone in Berlin. The film will shoot partly in the town of Görlitz on the German/Polish border, which was the main location for Wes Anderson’s The Grand Budapest Hotel. 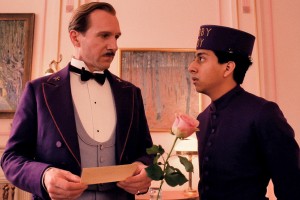 Based on the 1947 novel by Hans Fallada, the film features Thompson and Gleeson as a working-class German couple who launch an anonymous postcard campaign against Nazi Germany in the early years of the war. Daniel Bruhl plays the Gestapo officer chasing the culprits.

“Görlitz was never hit by World War Two and after the Wall came down the people of Görlitz did a wonderful job restoring and preserving their historic city,” said Klaus Darrelmann, Location Manager on The Grand Budapest Hotel (above), in a recent interview with The Location Guide.

“You see very little non-period signage there – as it is not allowed – which makes it quite easy to set up a camera at any other street corner and shoot a period picture with very little prep, something that made filming The Grand Budapest Hotel in Görlitz so much fun and easy.”

Görlitz also appeared in last year’s The Book Thief, again set during World War Two, which involved staging a Nazi book-burning at the height of the tourist season.

International productions filming in Germany tend to be based at Studio Babelsberg outside Berlin. The facility has recently hosted Ryan Reynolds’ The Voices, a remake of 90s surfer drama Point Break and Steven Spielberg’s upcoming Cold War movie Bridge of Spies.