Oscar-winner Matthew McConaughey has started filming new Civil War drama The Free State of Jones on location in New Orleans, doubling the state for Mississippi. Louisiana is no stranger to historical features, having recently hosted Django Unchained and 12 Years A Slave. 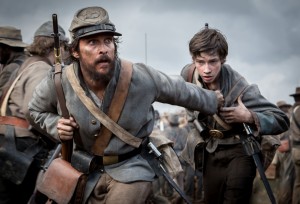 Directed by Gary Ross, The Free State of Jones is based on the true story of southern farmer Newt Knight who led a successful secession from the Confederacy during the Civil War.

Knight went on to marry a former slave and establish the only mixed-race settlement in the American South.

“I am thrilled to be continuing a relationship with Gary Ross that began with Seabiscuit (the 2003 horse-racing drama),” said Adam Fogelson, Chairman of STX Entertainment's Motion Picture Group:

“He’s an incredible filmmaker with a unique visual style, and with The Free State of Jones he brings a compelling and impactful untold story that is gritty and thrilling while also being heartfelt and intelligent. We are extremely proud that this is one of the first films STX Entertainment will be bringing to audiences.”

Louisiana has become one of the top production hubs in the US. Its uncapped 30% filming incentive has made it one of the few economically-feasible filming locations in America for big-budget studio features.

State authorities are nonetheless under pressure to overhaul the filming incentive programme and a yearly spending cap is being considered for the film fund for introduction later this year.

Jurassic World and Terminator: Genisys are among the big upcoming films to have shot in Louisiana. Dawn of the Planet of the Apes was based at Big Easy Studios in New Orleans and largely doubled the city for San Francisco.