The major new Chinese filming facility Wanda Studios Qingdao has made its debut at the AFCI Locations Show. Scheduled to open in mid-2017 in the Shandong Province of eastern China, the studios will be a subsidiary of Dalian Wanda Group and are set to span nearly 500 acres. 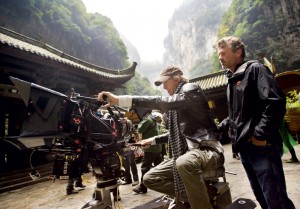 Plans for the new facility were first announced in late 2013, with a glamorous media unveiling that involved a host of Hollywood stars including Nicole Kidman and Leonardo DiCaprio. Filming incentive packages of 10% were announced in October last year.

Filmmakers will have access to 30 sound stages, an underwater stage, a water tank facility and post-production resources. Productions using the studios will also have access to filming incentives.

“We are building a world-class film and television studio and we are creating extremely generous production incentives which together will allow Wanda Studios Qingdao to successfully compete on a global scale,” said Nancy Romano, Chief Operating Officer of Wanda Studios Qingdao.

“When an international production comes to shoot on our lot in the beautiful, coastal city of Qingdao, the cast and crew will be fascinated by the unique cultural experience that this city has to offer.”

China is making moves to both develop its domestic film industry and to become more involved in international production by investing in big-budget Hollywood shoots like Warcraft and Seventh Son.

Hollywood dominates the Chinese box-office despite highly restricted access to the market. More shoots – like Transformers: Age of Extinction (above) – are making deals with Chinese production companies to qualify as co-productions and bypass the country’s annual quota of foreign film releases.