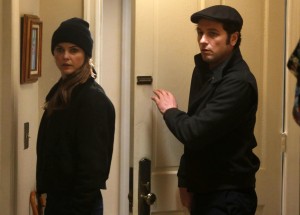 “We tend to gravitate uptown in Manhattan around Columbia University where there’s a lot of good architecture,” said Location Manager Michael Fucci in an interview with DNAinfo.

“There’s Grant’s Tomb up there… it’s a very, very DC-looking monument. There’s Union Theological Seminary, St. John the Divine, a lot of learning institutions up there that play as a backdrop. We did a big chase sequence in the end of season one with those surrounding it.”

Staten Island, Queens and Brooklyn have both popular filming locations offering generic industrial cityscapes, and the show has also used Queens as a stand-in for West Germany.

“We’re going to get lots of European vintage cars, and they have to work,” adds production designer Diane Lederman to the outlet: “You’d be surprised at how different signage is in Europe from America, so all of the signage on the street has to be covered or in some way changed, altered to be in German.”

New York is an East Coast production hub and much more film-friendly than Washington. The US capital lacks filming incentive support and local shoots can be affected by complex bureaucracy.

Washington remains a popular production setting but shows like House of Cards, Veep and Scandal typically only shoot establishing shots in the capital before relocating elsewhere. House of Cards and Veep both shoot in Baltimore, Maryland.