New drama series Dig launches in the US tonight. Set in Jerusalem, the production started filming the city for real last summer before renewed violence flared between Israel and Gaza and producers decided to relocate to Croatia, with studio work shot in New Mexico. 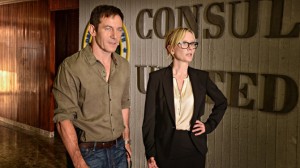 The mystery crime series follows an FBI agent sent to investigate the murder of an American woman in Jerusalem and the ancient conspiracy he uncovers in the process.

“We filmed underneath the city in various tunnels and caves,” series creator Gideon Raff told the Fort Worth Star-Telegram.

“Most dramatic of all was perhaps the Tzidkiyahu Cave, which was a quarry that is 3,000 years old. Originally, the rock here was quarried by King Solomon's miners to build the Temple Mount, the Western Wall and the Old City.

“It was an incredibly moving place that has never been used before for any filming location. When you are shooting in these amazing places, no matter where you point the camera, there are thousands of years of history staring back at you, which was a huge privilege.”

Dig also recreated Jerusalem exteriors on location in the Croatian cities of Dubrovnik, Trogir and Split. The country offered the right visuals and, crucially, a 20% filming incentive. Croatia has enjoyed a sustained profile boost in recent years as the stand-in for capital city King’s Landing in HBO’s fantasy drama Game of Thrones.

New Mexico offers a 30% filming incentive for TV productions and is the most popular filming location in the US for desert landscapes.