Vancouver production company The Embassy took to the streets of Cape Town for a new stunt drive to promote US oil company Pennzoil. Airlift Drift features a Dodge Challenger Hellcat using the South African city as its night-time playground. 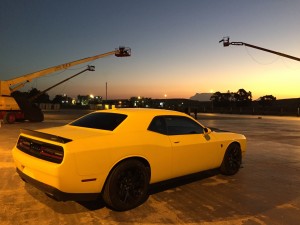 The production team considered filming locations across the Americas before choosing to make use of Cape Town as a stand-in for San Francisco.

Local servicing was provided by Uncle Morris Films, and by Lemonade Films for some Vancouver pick-up shots.

“Additionally, Cape Town was extremely film-friendly for the idea and the scale of the logistics we needed to achieve. Plus the weather was ten out of ten.”

The Dodge Challenger Hellcat was shipped from the US on a 747 and then an expansive section of downtown Cape Town was shut down to accommodate high-speed driving over four nights.

“Rhys Milllen, our stunt driver, is one of the very best in the world,” Cawood continues: “His rehearsals are shockingly minimal. He literally gets into a sports car and after ten minutes drives it like he's owned it for years."

Cape Town was extremely film-friendly for the idea and the scale of the logistics we needed to achieve.

“Extensive shot design and layout between director and crew took weeks to plan prior to the shoot," Cawood adds: "The filming looks fluid, but actually it was all very meticulously planned from animatic stage through locations choices to shooting.”

Few physical changes were made to the Cape Town locations, with minimal visual effects work afterwards.

“We wanted the environment to be as realistic and raw as possible,” Cawood concludes: “It’s a gritty spot, not a beauty spot.”