Fast & Furious 7 brings the motoring action franchise to Abu Dhabi for the first time, filming in multiple iconic locations and making use of the city’s 30% filming incentive. The production team spent two weeks filming in and around the city. 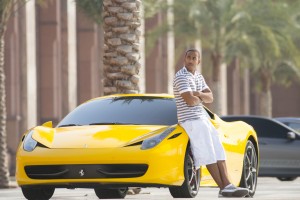 “The locations in Abu Dhabi are amazing,” commented director James Wan: “It adds a lot of production value to the film and makes it really exotic.

“We want to strike a balance with both the opulence in this part of the world as well as what is more traditional and cultural just to get a bit of that flavour into the film. It’s a bit different to what the Fast & Furious fans have seen before so there is a natural evolution in the series.”

The Fast & Furious franchise was serviced locally by twofour54 and is a major profile boost for Abu Dhabi, which will also feature in the new Star Wars film later this year.

National airline Etihad Airways launched a direct route last year connecting Abu Dhabi with Los Angeles in an effort to ease travel convenience for US producers. A plane branded with the Fast & Furious 7 logo was unveiled for the route to tie-in with the film’s release.

Abu Dhabi’s filming incentive has helped broaden the city’s international appeal, although Bollywood productions are still the most regular visitors. The city has been called upon to expand its studio facilities to attract more foreign producers.

Further east, Dubai is yet to offer a formal filming incentive, preferring to instead put together bespoke packages tailored to the needs of specific productions. This proved successful for Mission: Impossible – Ghost Protocol but the city has not since been able to attract anything on a similar scale.