Mark Wahlberg is set to produce and possibly star in new movie Patriots’ Day, the story of the Boston Marathon Bombing in 2013. Wahlberg is a Boston native and has previously worked in the city on movies including The Fighter and The Departed. 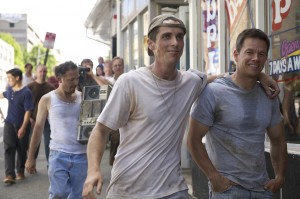 Patriots’ Day is based on the firsthand account of the Boston Police Commissioner. Ed Davis played an integral role co-ordinating the response to the bombing and the intense manhunt for that followed over the subsequent five days.

The film will be produced by CBS Films in conjunction with 60 Minutes, the network's current affairs news programme that originally ran an interview with Ed Davis shortly after the bombing's prime suspect Dzhokhar Tsarnaev was caught.

“There is nothing more compelling than a real story populated by real heroes,” said CBS Films President Terry Press. “The team that we have assembled for this project is determined to give audiences a very personal look at what occurred during the days when the eyes of the world were on the city of Boston and how a group of contemporary patriots faced this crisis.”

A rival Boston Bombing project is being developed by Fox based on the non-fiction book Boston Strong, which also details the five-day manhunt.

Massachusetts offers a 25% filming tax credit, but the programme has an uncertain future since the Governor recently proposed redirecting the money elsewhere in the state economy.

New England Studios was recently established near Boston to help create a permanent production industry in Massachusetts, but the state will struggle to attract high-profile shoots if the filming incentive is defunded.