Companies in New Zealand and China are set to produce the first 3D animated co-production between the two countries. Huhu Studios in Auckland will work with China Film Animation on Beast of Burden, with financing from Qi Tai Culture Development Group. 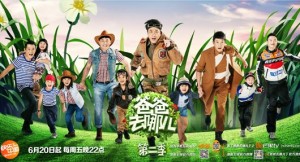 “With the help of our friends from Qi Tai, this is the beginning of a close relationship for many years to come.”

The announcement was made at the Beijing Film Festival, which Film New Zealand attended for the first time as part of its efforts to forge closer production links with China.

“While the agreement, in the short term, is likely to be used for animation and documentary projects, over the longer term that may well expand,” said Maggie Barry, New Zealand’s Minister for the Arts, Culture and Heritage, when the agreement was made.

One of China’s most popular reality game shows - Dad, where are we going? (above) - filmed extensively in New Zealand in September last year. In addition, the long-gestating sequel to the Oscar-winning 2000 feature Crouching Tiger, Hidden Dragon, recently divided its shoot between China and New Zealand.

Australia is also pushing for stronger ties with China and sent its largest ever delegation to Beijing over the weekend for a festival presence that culminated in the Australia-China Film Industry Forum.