Epoch Films shot scenes in a rural Bolivian community as part of an international campaign for Internet.org, an organisation set up by Facebook to boost global web connectivity. Erika and Esmeralda follows two children who invented a hydraulic mechanical arm for a school project.

The film is part of a broader campaign directed by Alma Har’el. Two thirds of the world’s population are not connected to the web and so Internet.org was set up to demonstrate that everyone may be losing out as a result of local achievements that are difficult to share with the world.

Erika and Esmeralda are presented as two inspired young girls who are the potential robotic engineers of tomorrow, but whose ambitions could be limited by their lack of internet connectivity.

“These 11 years-olds lived far away from any mayor city and far away from their own town – one or two hours walking from their school to their homes,” explains Rémi Noiriel of service company Jacaranda Films: “They didn't have any way to communicate their achievements.”

Shooting in Bolivia you should be prepared for small equipment offers, big traffic delays, sickness and cold, but people and landscapes that make all of that worth it.

The production team decided they would film the girls in their home town of Ancoraimes in western Bolivia.

Access was immediately a challenge. The town was only 75 miles from provincial capital La Paz, but rough, high-altitude terrain made travel slow. Once in Ancoraimes, the team faced extremely limited infrastructure, including only basic accommodation options, no electricity and, of course, little internet access. 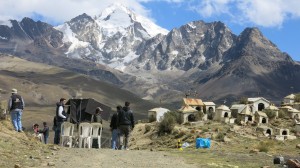 As is so often the case, these practical issues were countered by the hospitality of the local people.

Noiriel warns that Bolivia’s domestic production industry offers only Red cameras, so equipment routinely needs to be brought in from other parts of South America, the US and even Europe. Bolivia’s national film commission CONACINE helps with equipment imports.

“Bolivia is not a very developed production service destination so answers and information normally takes a while,” Noiriel continues: “Ancoraimes is not an easy production place. It's on the coast of Lake Titicaca with no decent hotel nearby to get the whole production team to sleep in and poor communication and internet.”

Adjusting to the altitude was a major challenge, especially given that over half of the 25-strong crew were from the US and unused to the conditions. Almost all of them felt altitude sickness at one time or another but the team was prepared and travelled with a doctor.

“You'll be more than 12,000 ft above sea level and your lungs and head might not be too much into this,” Noiriel comments: “Also, your stomach won't be used to all the delicious food and spices, so be prepared!

“If you are shooting in Bolivia you should be prepared for small equipment offers, big traffic delays, sickness and cold, but people and landscapes that make all of that worth it.”