Primo filmed on location on the streets of Buenos Aires for a new campaign for Scotch Whisky brand Johnnie Walker. Entitled The Journey, the spot treats viewers as the subject and challenges them to inspire individuals and crowds in the streets of an unnamed modern city. 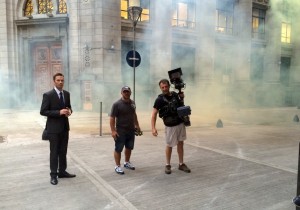 Several cities in Spain were considered as a filming location for The Journey, but the production team instead opted for the better weather – the shoot was in January – and the distinctive architecture of Buenos Aires.

“The locations were chosen with the aim to give the piece a big scale,” comments Gaby Cárcova, an executive producer with Primo.

“There were few changes on location. We just set-dressed a theatre entrance for the rock star scene surrounded by journalists and we built a stage on the square for the final scene.
Other than that, the set dressing was minor and the locations appear as they are.

“We had to permit several streets and we also needed to get a permit for a square which is not often used for shootings, but we did not have any major inconvenience. We had a very good team and the support from Buenos Aires Film Commission.”

Distinctive European architecture and a series of different styles make Buenos Aires a hugely popular international filming, particularly for commercials. Almost 500 different production companies are based in the city.