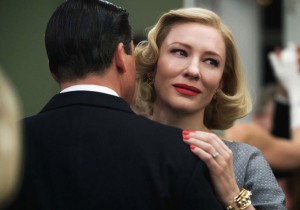 “Cincinnati was a dream city to shoot in,” said Carol director Todd Haynes, in comments to Cincinnati.com.

“Not only did it offer us an extraordinary wealth of locations bringing untold value to the look and feel of our project, but the human resources – the local talent, creative and technical personnel, and city infrastructure – enriched and contributed to the experience in untold ways.”

“It's the perfect stand-in for a different era. Often, you will see the external originality of a building, but the inside will be gutted out to be contemporary. We have the rarity of restaurants, ballrooms and hotels – both interior and exterior – sharing the same old-fashioned feel.”

Ohio has doubled for New York in numerous high-profile movies in recent years. Cleveland stood in for the city for the epic ‘Battle of New York’ finale in Marvel’s first Avengers film, and also filmed part of Captain America: The Winter Soldier in the city.

“We landed on Cincinnati because of the attention and total co-operation of the film commission, the state's film incentive, the location and the good-will of the people,” said Cheadle’s producer Pamela Hirsch during the shoot.