Catalonia in north-eastern Spain is building on its rich local filmmaking history by appealing more to the international production community. The Location Guide set out on a scouting trip hosted by the Catalunya Film Commission to explore the region’s sights and history.

I arrive in Barcelona via a two-hour flight from London. Travelling with me on the scout is Mickaël Bec, a Line Producer with French production company Purple Papaya Films and Tina Winholt of Zentropa Productions in Copenhagen. Also joining us is Becky Brake, a US-based Supervising Location Manager and veteran of the Mission: Impossible and Star Trek franchises. 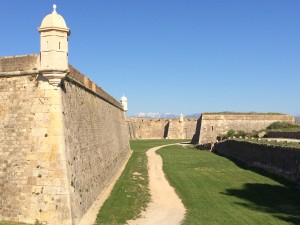 Barcelona is Catalonia’s production hub and the modern European metropolis is where most of the region’s specialist crew and equipment is based. Urban filming in the city is directly supported by the Barcelona Film Commission, but the Catalunya Film Commission emerged as a separate entity in 2014. The organisation uses the area’s Spanish spelling – the region is known and marketed internationally as Catalonia.

Our scout - led by the commission's Carlota Guerrero and Lala Boldú - is part of a drive to raise Catalonia’s international profile. It's timed to coincide with the recent launch of the Catalunya Film Commission’s new book Scouting in Catalonia, a catalogue of images showcasing the region’s locations.

We begin in the historical town of Figueras, a 90-mile journey north-east of Barcelona near the French border. Leaving Barcelona on a bright and cloudless morning, the journey takes less than an hour on the AVE high-speed train line. The service also offers a swift and comfortable route across eastern and southern Catalonia, and through the regions of central Spain.

Our first destination is Castell de Sant Ferran, an 18th century fort that overlooks Figueras. An imposing structure, it was originally built to defend against French invaders and was once home to a garrison of 16,000 men. It’s been mostly un-used since the Spanish Civil War of the 1930s and is now a museum.

The many local film commissions were extremely friendly and very helpful, which is always a big plus.

A 45-minute drive south of Figueras takes us to the historic town of Girona, one of the architectural jewels of Catalonia that’s also on the high-speed rail link to Barcelona. Girona dates to the Roman era and presents a classical labyrinth of narrow streets that offer welcome cool shade from the midday sun, before opening into broad squares that showcase the city’s terraces and grand churches. 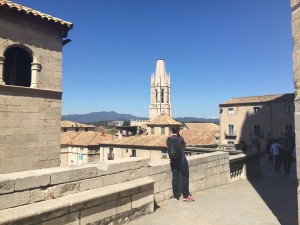 Popular among Barcelona day-trippers, Girona offers endless cultural delights to satisfy the inquisitive visitor – from shops and cafes through to bright riverfronts – and an array of interesting architectural looks spanning the centuries to cater for production needs.

A drive of just a few miles beyond the city limits reveals a series of medieval market towns and villages that offer further secluded snapshots of Catalonia’s history.

Although routinely scouted and filmed by local TV productions – and often by international commercial campaigns – Girona and the surrounding market villages remain largely undiscovered by international TV and film producers.

In Girona we enjoy our first of many fantastic seafood meals – mussels, squid and crayfish are among my personal favourites over the course of the scout. Seafood is naturally a regional speciality and another of Catalonia’s major draws. 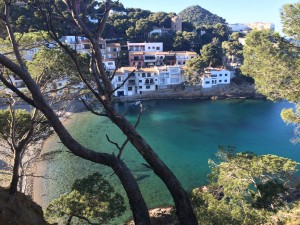 It’s here that my chats with the locals remind me of Catalonia’s fiercely independent spirit. Many consider themselves Catalan first and Spanish second. There was even an informal provincial referendum late last year that suggested a majority of Catalonians want independence and complete separation from Spain. It’s a powerful political sentiment but does not impact negatively on visitors.

South of Girona we visit quiet beaches of sand and pebble as the afternoon light fades and the sun sinks. The blue-green water of the Mediterranean surf on Sa Tuna beach was a favoured holiday spot for Rock Hudson and Elizabeth Taylor and it’s easy to see why. The beach feels like a secluded island and the sand is all but deserted as we explore.

Our tally of historical treasures continues west of Girona with the Castle of Cardona, an impressive mountain fortress that dates back to AD 886. Looking somewhat brutish from afar, the fortress in fact now conceals a comfortable hotel within its Romanesque and Gothic architecture, all of which quickly becomes more inviting up close. The state-run hotel is known in Spanish as a parador.

The fort’s stand-out features are its 11th century tower and the Romanesque Church of Sant Vicenç, a magnificent and cavernous building that was scheduled for a local shoot shortly after our scout.

Cardona has great filming potential, with the hotel a handy place for a very comfortable overnight stay, given the castle’s relatively remote setting. The Castle also offers easy access to the nearby and otherworldly potassium salt mine Mina Nieves de Cardona. Now a cultural centre after ceasing operations in 1990, the mine offers unique and desolate exterior vistas that could suit productions seeking a post-apocalyptic environment. 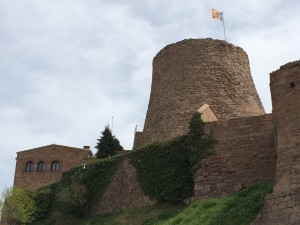 A few hours’ north of Cardona we reach the foot of the Pyrenees and Catalonia’s historical heritage merges with dramatic mountainous topography beneath moody skies. The Oliana reservoir is a stark monument to Spanish hydroelectric energy and the mountains around the town of Sort offer charming historical hamlets with vibrant personalities.

These are the only grey days of our scout and the skies are patrolled by birds of prey, adding a subtle drama to the environment.

It was a good overview of what Catalonia has to offer in terms of gastronomy, hospitality and local support.

Spanish productions have shot in these picturesque parts basing their crew in the relatively accessible surrounds of Sort. However, while the mountain visuals are staggering, the logistical challenges involved in accessing them are considerable.

More practical for larger shoots is the mountainous region of Pallars Jussà south of Sort. An established climbing hotspot, the area offers towering jagged cliffs and ridges, plus distinctive waterside tunnels that have great potential for atmospheric chase scenes. Pallars Jussà is within an hour of Barcelona, making it an option for day shoots.

Leaving the mountains of Terradets we continue south by way of Alguaire Airport, a small airstrip just outside the city of Lleida. The airport in fact looks inactive from afar and its distinctive control tower is in need of some paint, reaching into the sky from an otherwise featureless plain.

However, the place is in fact very much in use by light aircraft, although the terminal building is virtually empty when we tour the facility. The airport is potentially useful for producers looking for air access to central Catalonia.

Onward to Lleida and we enjoy a late lunch at La Llotja Convention Centre, one of Catalonia’s most striking examples of bold modern architecture amid the city’s cluster of historical buildings. 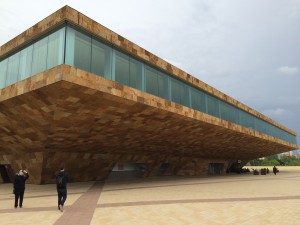 An angular spacecraft of a building, La Llotja is a multi-purpose event venue complete with a ballroom, convention halls, business centre and a large auditorium. The facility is yet to be used as a filming location, but it offers a wealth of possibilities for producers looking for something new.

We spend the night in Delta de L'Ebre (Ebro Delta). The area offers a vast wetland plain that bears a striking resemblance to South-East Asia.

As we head back towards Barcelona we make a brief stop at the beaches of Sitges and then the historical port of Tarragona. Inland, producers have access to the Franco-era Tarragona Educational Complex, a sweeping campus of wide open spaces and faintly militaristic teaching blocks. Ancient historical monuments become more prevalent in the port, matching Girona's historical scenic appeal.

Lastly, we tour Catalonia’s stage facilities at the Parc Audiovisual de Catalunya just outside Barcelona. A former respiratory hospital has been converted into a production base and has added four purpose-built stages.

The hospital building itself ceased treating patients only a few years ago and remains largely untouched. A colourful exterior resembles a cheery apartment block but masks a maze of dim and empty corridors and the occasional abandoned hospital bed.

It’s dusty and derelict, and creepy even in the late afternoon sunshine, but it’s safe and cannily promoted as an atmospheric filming location. Spanish student filmmakers are the most regular visitors. The stages remain the studios’ main appeal.

In overall practical terms, one of the biggest challenges facing Catalonia is the fact that Barcelona remains the production hub. We travelled by road over several days, sometimes with a couple of hours between stopping points, which could have implications for large-scale productions looking to get out of Barcelona and contending with a tight schedule.

Accommodation was very comfortable across the region, with four- and five-star hotels available in most of the larger towns and cities suitable for productions travelling with executives and VIPs. My personal favourite was the ocean view offered by Hotel Santa Marta in Lloret de Mar, while suites in the five-star Hesperia Tower - in the Municipality of L’Hospitalet immediately south-west of Barcelona - offer incredible views across both cities.

Internet access was less reliable across the region. Connection speeds were up and down across Catalonia, but the quality of WiFi coverage could be anticipated depending on the location of the hotel.

Catalonia has been less successful at appealing to international TV and film productions in recent years. This has perhaps been due more to the lack of a national Spanish filming incentive programme and intense international competition.

Things could all be about to change. The Spanish government launched a new 15% filming incentive in November last year, which could finally become active later this year when production eligibility details are fully confirmed.

“Catalonia offers interesting and varied landscapes – very Mediterranean,” Mickaël Bec considers: “I would definitely consider taking my crews over the border for a Catalan experience. The different people in charge of the many local film commissions were extremely friendly and very helpful, which is always a big plus for a successful shoot.” 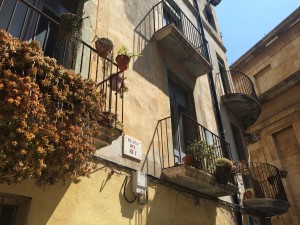 “I think it was a good overview, not only of the wide diversity of locations with great production value,” adds Carlota Guerrero, “but also of what Catalonia has to offer in terms of gastronomy, hospitality and local support and professionals, which I believe are also key factors to take into account when shooting abroad.

“I hope that directors, location scouts and managers and production companies will continue to explore the region beyond the limits of Barcelona and benefit from all Catalonia can provide.”

The Catalunya Film Commission was fantastically hospitable during our scout and we were joined over the course of the trip by many experts from local film and tourism offices. There was unwavering enthusiasm for Catalonia’s film industry and a real desire to showcase Catalonia’s burgeoning potential to the world. On an international scale, Catalonia is just waiting to be rediscovered.