Television docudrama American Genius filmed on location in West Virginia and tells the stories of a selection of America’s most renowned inventors. The series was produced by Stephen David, whose previous West Virginia projects have included docudrama The World Wars. 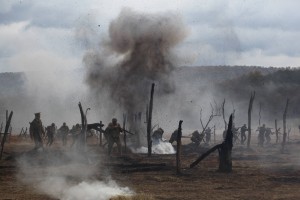 American Genius will focus on inventors and innovators including the Wright Brothers and Thomas Edison, as well as more contemporary figures like Bill Gates and Steve Jobs.

“Mr David has become enamoured with West Virginia's beautifully preserved historic locations throughout the Eastern Panhandle and is planning to film additional projects in the near future,” said Pam Haynes, Director of the West Virginia Film Office.

“These productions have allowed our workforce to gain valuable experience and to expand their skill sets. The film office has been aiming to build a sustainable industry, and Stephen David Entertainment is helping to make that happen.”

For The World Wars, David and his production team used West Virginia as a stand-in for locations around the world, including Mexico, Germany, Italy and France.

“It’s a very film-friendly community [in West Virginia],” said David when The World Wars was first launched: “The people and businesses are genuinely excited to have us. When you’re greeted with that sort of positive attitude, it really helps set the right tone for your production.”

West Virginia offers a base 27% filming incentive, but the annual fund is relatively small at just USD 5 million.

The state also incentivises local crew hires and the film office is running a production co-ordinator training course in Fairmont in mid-June.

“Since May 2013, the Film Office has trained more than 185 people in several different skill sets through its workforce training initiatives, which are an essential factor in the continued growth of the state's film industry,” Haynes added.